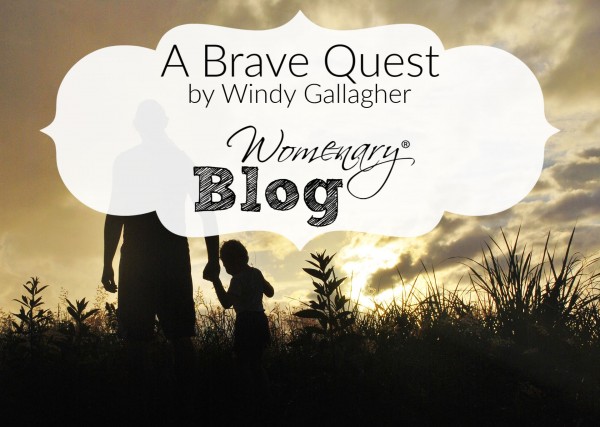 “If you catch this ball I will give you one hundred dollars,” my husband shouted to our youngest son. He blasted the football as high as he could, straight up in the air, and quickly moved his body backwards getting out of the way.

My son smiled, eyes wild, heart racing, feet scrambling, as he ran full speed to the place where his dad had been standing. He hovered there, trying to predict the exact spot where the ball would drop. It seemed impossible, which is exactly what my husband thought when he made the promise. Our son was only six years old at the time, and the football that was now careening rapidly to the ground was almost as big as he was.

He stumbled as the sun shone brightly in his eyes, so focused on keeping his gaze upward that the ground beneath him caught him off guard. He held his arms straight up, fingers wide and stretched out, and that football landed perfectly in his tiny little hands, safely in his grip.

My husband was shocked, shaking his head from side to side in disbelief. My son, on the other hand ecstatic, screamed with infectious joy. It was just a matter of seconds before he demanded what he had been promised. It was, after all, the promise that overcame the impossibility of the situation in favor of the fulfillment of his expectation.

A promise can do such things!

In the front yard that day, the simple trust between a father and his young son lit a spark to the impossible. How much more should our Heavenly Father’s unfailing promises ignite within us a brave quest through the obstacles of this life? When we truly believe that the One who makes the promise has the power and willingness to fulfill it, we can see beyond the things in our way and hold tightly to the sure fulfillment of the promise.

“Without the clear and certain promises of the Word of God, the believer has no basis for hope.”  —John MacArthur

It is a gift to read about the men and women in the Bible who came before us, leaving with us their beautifully raw and real stories of faith. We are encouraged by their lives, we can relate to their struggles, and we can learn how they held tight to hope through their incredibly challenging journeys.

Reading through Genesis, we are inspired by a man named Abram (whose name was later changed to Abraham). Abram believed God and took hold of His promises:

Now the Lordsaid to Abram, “Go from your country and your kindred and your father's house to the land that I will show you. And I will make of you a great nation, and I will bless you and make your name great, so that you will be a blessing. I will bless those who bless you, and him who dishonors you I will curse, and in you all the families of the earth shall be blessed.”

If there ever was an impossible situation, it was Abraham’s. Among other things he was old, his wife was barren, and he knew little to nothing about the place where he was headed. Few were the details, great were the unknowns, but the One who made the promise was faithful. The promise moved Abraham out and on towards a greater reality.

Obviously, the exact steps of my journey are not the same as those of Abraham; but I can relate to being riddled with unknowns. I have been in situations where I was unsure I would get through the next minute. There are times when I struggle to see just how my circumstance will work out for the good.

Each new day teaches me to keep my eyes on that greater reality, even when the ground beneath my feet catches me off guard and I stumble. So I am deeply encouraged by Abraham’s story of faith and strengthened by his journey, thousands of years after he took his last step on earth and was surely met with his first welcoming embrace in the Kingdom.

It is the same belief that God is able and willing to fulfill His promise that connects us, and so the promise moves us on.

Recently I have spent time contemplating some of the things that motivate me in my life. The sweet and faithful voice of my husband as we celebrate almost twenty years of marriage, the trusting admiration of my children as they look to me for guidance, and the everyday ordinary encounters within my community all move me to be a better human.

There is only one thing that is absolutely sufficient to sustain me through the obstacles of life though; and that is trusting in the promises of God, which are developing in me an immovable faith.

Windy Gallagher lives in Tyler, Texas where she is a thankful wife to her college sweetheart, and a mother of two brave and handsome boys. Windy has been a Womenary student for many years and is a member of the Womenary board. Her passion for the Lord is often expressed through her writing about the real struggles of life and the practical and profound ways God uses them to bring victory and freedom in her life. Join her on Facebook or twitter @windybecca
Prev:  Scrooge is the Gospel
Next: Don't Be Stupid